The Harvesters FC Walking Football group originated over seven years ago as an activity under the umbrella of the St Albans U3A
The first attendance sheet had a dozen names on it but that increased as members from adjacent U... 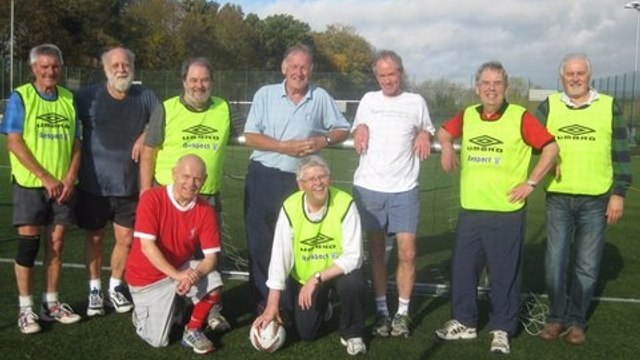 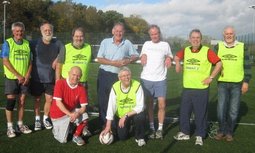 The Harvesters FC Walking Football group originated over seven years ago as an activity under the umbrella of the St Albans U3A
The first attendance sheet had a dozen names on it but that increased as members from adjacent U3A’s signed up.
Our first games were tentative as the converted tarmac tennis court off Sherwood Avenue was an unforgiving surface.
We celebrated our first Christmas with a floodlit match at Sandridge Rovers and a visit to the Green Man.
We must have done something right as five founder members still play whilst others have retired through ill health or injury.

We met fortnightly, which gave us good recovery time but numbers varied enormously. A 3 v 2 tested our ingenuity, but we persevered.
Harvesters FC were delighted with our request to become part of their great club and we became the first Walking Football team to be affiliated to the Hertfordshire Football Association.
The aggregate age of one of their most junior sides was less than the age of just one of our most senior strikers!

We won the first competition we entered and loved the spirit within the game.
Then it got advertised and commercialised and we were hammered by the likes of Stevenage and Orient the next time out.
Subsequently we limited our exposure and withdrew into the calm atmosphere at Smallford.

Currently we have around 30 players on the books, of both sexes and an age range of about 50 to something higher.
We come from all walks of life and support a variety of teams.
Our Northern Nomads v Southern Softies games are challenging.

Many would not get through airport security without setting off an alarm.
Children and grandchildren have made guest appearances and come to realise how challenging the game can be.

Now, on a weekly basis, we play for enjoyment, and sometimes we almost play to the laws of the game.
We play for fun and to improve our fitness. Consequently we have made friendships and lent each other support.
We ‘chew the cud’ after each session as an essential part of our warm down.

And we have oranges at half time! What’s not to like.

Back in the olden days, long before Barclays Bank got the idea and tried to lure the silver generation to bank with them, St Albans U3A (google it!)) tried to start a Walking Football (WF) group. It failed at first but then burst on the City’s soccer scene on 23rd October 2014. Life has never been the same since. Now it has celebrated its 30th session with a second game of Starlit Soccer underneath the lights at Sandridge Rovers FC, close by the three pubs in which the local Village Voices were singing carols. What an occasion to sing the praises of the players who have survived the experience.

That first session on a gravelly tennis court next to a ‘Sure Start’ nursery was anything Fifteen months on, useful exercise, resurrected skills and great fun are a recognisable feature of every other Thursday morning.

By the third session, the injured and the unimpressed had deserted the cause but our first festive football session and the offer of mince pies and mulled wine at half-time rekindled hope. And the kindest of offers from Harvesters FC to use their 3G pitch from January was just the boost we needed. With the risk of injury lessened, an electronic clock and the convenience of a toilet in the clubhouse, who could resist our new venue?

Well, as it happened, quite a few. We welcomed some foreign signings from neighbouring U3A groups (Chiswell Green and Wheathampstead) but the numbers varied and the excuses increasingly threadbare. Groin strain, calf injury, hernia operation, Bermuda cruise, caravan holiday, wedding anniversary, moving house, all the usual lame efforts failed the originality test. Not once did anyone use the professional footballer’s excuse, ‘I didn’t fancy it!’.

During the summer break we took our version of the ‘Beautiful Game’ to Wheathampstead Village Weekend and drew admiring gasps from the sun-drenched festival crowd with a passing game that was at times mesmeric and so viewed our second season with confidence. But numbers fluctuated wildly. Then, just in time, Harvesters Charter Standard Community Club came to our rescue, lifted us from the floor and enabled us to be the first Walking Football Club to affiliate to the Hertfordshire Football Association.

So in January, after a continental-style midwinter break we will resume with our gentle warm up routine, practice deft touches, increase our spatial awareness, miss goals, eat oranges, drink Lavazza coffee, smile a lot and laugh even more at our John Cleese-like step overs. After inevitable 5-5 finishes our penalty shoot-outs will again end in tears (of laughter). The shirts of Accrington, Torquay, Preston NE and Carlisle United will be worn with pride. Other WF groups may not like or understand our current version of the game as it’s based on cooperation and not opposition. But we do.

This is the unsolicited response from a recent recruit;

It is the 30th anniversary of my cruciate ligament operation when I was told not to play again. All I have done is therefore make up the numbers when coaching at school or with local youth teams. As I have told my son and daughter, they have had to play for me for the last 20-odd years, they have been the only way I could still get close to enjoying this marvellous and all absorbing game.

I am back, thanks to walking football. It is all I had hoped it would be.

And more. A great bunch of fellow enthusiasts who made me feel at home despite all my worries about how I would cope having not even kicked a ball for about 5 years.

Thanks to Harvesters Walking Football is ‘up and running’. Well, walking, actually.